The Vinyet Chapel, Sitges' Emotional Heritage and an Essential Visit

August 5th is the Day of Our Lady of Vinyet, whose sanctuary, declared Architectural Heritage, becomes a meeting point to worship Sitges' most beloved virgin. Holy Masses in her honor, a small market and fireworks are all part of the agenda for this special day. You really shouldn't miss it if you're in Sitges because it's about emotional heritage shared by all the locals.

The place where the current Vinyet Chapel stands first hosted a prosperous Roman villa, as evidenced following various excavations. And it was after the fall of the Roman Empire when the first church was built in honor of the virgin of Vinyet. Legend has it - you like legends, right? - that a Morisco slave named Alí, while working in the vineyards, found the image of the virgin buried there underground. He quickly picked it up, put it in his basket (it was very small, no more than 40 centimeters), covered it with a cloth and ran to the house of his master, Mr. Milà. When he received him, Ali showed him the contents of his basket... but it was empty. The poor slave apologized and returned to the vineyards. And there, in the same spot where he had found her, was still lying the virgin. 'It can't be', thought Ali, who put her back in the basket and returned to the Milà family's house. They welcomed him back... and the basket was empty again. Mr. Milà suggested accompanying him to the place where the events took place... and there, indeed, he was able to see the virgin with his own eyes. His decision was immediate: they would build a sanctuary in honor of Our Lady of Vinyet.

The Chapel soon became popular and gradually started to grow, also in the number of devotees who came to worship the Virgin. Our Lady of Vinyet was the one who was trusted, for example, by those Sitgetans who went to America to try to make their fortune -the ones known as 'Indianos' or 'Americanos'. That's why, if you visit the sanctuary, you will see the votive offerings that they made to her on their return hanging there in the form of different models of their boats. 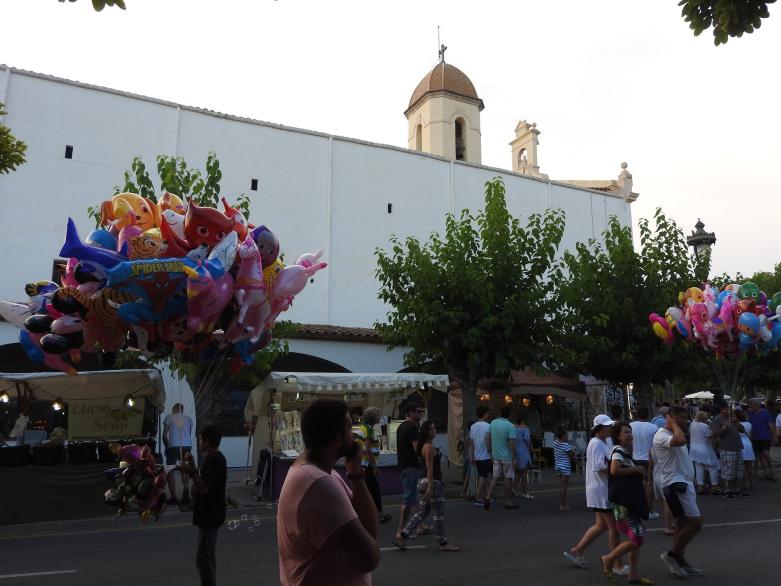 This whitewashed Chapel's iconic bell tower was built in 1801. And the present image of Our Lady of Vinyet is the work of Pere Jou, who rebuilt it in 1939. Jou was also the main sculptor of the Maricel Palace, where the capitals, doors and windows bear his signature. Also noteworthy inside the sanctuary are the polychrome wooden altarpieces, which precede the altar where the virgin is found, leaning on vine branches and wearing a shawl that changes color depending on the time of year and the celebration - purple at Easter, white when there are weddings, for example.

Now that we've explained the legend and the attractions of the visit, we're missing the practical details. When can it be visited? Well, from Monday to Saturday, from 11 am to 1 pm and from 4.30 pm to 7 pm.  And during the month of August, Saturday evenings are extended until 9 p.m., as there is usually a previous mass.

Or would you prefer a guided tour? Good idea. Once again, we'll leave you in the best of hands: those of Rosa Julià, who runs the Agisitges agency, which also organizes tours along the so-called “Americanos' route”. Rosa stresses the sentimental value that Our Lady of Vinyet still has for the women of Sitges, "who is very dear to the town and that explains why there are so many girls and women who are called Vinyet, a name that isn't at all common in other places”.

If you visit the sanctuary you may see Olga, who lives in the Chapel, in the adjoining building, together with her daughter and her parents. She has been in charge of the temple's maintenance for 15 years. She came here with her husband, who passed away, and always has a smile ready for any visitor. So do Amalia and Jordi, her parents, who bring life to a small vegetable garden where the tomatoes smell like tomatoes and taste like tomatoes. Their tender loving care is the key to this 'miracle'... although I'm pretty sure the Virgin also lends a helping hand ;)